This is a long one - but I have been promising a breakdown of how we build our small-scale licensed dairy for a long time. My apologies for the delay!

We began planning our dairy 3 years before we broke ground. Or should I say that *I* began planning our dairy. It was very fluid for a while, and at one point, Dennis agreed that we would build a goat barn without knowing that I had a secret expansion plan to add a dairy. When he saw my expansion plans, he was a bit exasperated, but declared that he wasn't going to be adding on to this building a year later, so we would build it all at once. Score for me!

I have spent 3 years using makeshift goat housing - when we had 3-4 does, they lived in an old horse trailer that was moved weekly to new pasture. Once the herdshare program took off and I was at 6-10 does, we moved them into an old horse run-in shed. I essentially took it down to poles and roof a couple of different times, working to find the right housing and milking combination that would work for our situation and management style. Dennis jokingly asked if my next barn should be made of Legos so that I could change it around, but I knew that I was tweaking my management and would be happier with the final barn if I modified the prototype.

We decided that since I still have a full-time job, that we would have no more than 20 milking does. That gave us a size to shoot for in terms of the doe housing. We also didn't want to build multiple buildings, so we set out to build a single barn that would include doe housing, modest hay storage (bulk hay would be stored elsewhere), the milking parlor, milkhouse and cheeserooms. Based on that, I reviewed the literature (i.e. the internet) and came up with a prototype blueprint.

Before we put a single pole in the ground, we invited our local dairy inspector out to review the site and plans. Some people say that dairy inspectors are not helpful, but as a scientist who has dealt with laboratory inspections for 25 years, I understand their role. They have to interpret the standard and decide if your plan meets it - they can't really provide suggestions or advice on how you should build your dairy. That said, our inspector had a few suggestions to improve contamination prevention (moving the cheeseroom door and adding a milk transfer window) that were helpful.

This initial meeting was really critical for us - as a small farmstead dairy, we are relying on our home well water and home bathroom as being acceptable. If he had not approved the location based on well, septic, and distances between everything, we might have spent a lot of money and time putting the building up without it being acceptable.

We wanted a common lounge area for the milking goats with multiple hay feeders for access by all animals, not just the dominant animals. We also wanted one way movement through the milking parlor, so we needed a place to anchor gates so that animals couldn't come back through for a second round of breakfast. We settled on the below plan, which was just a bit larger than our prototype run-in shed that we had been using for 3 years. We also put in 3 concrete strips, alternated with stone dust for drainage. With the winter bedding pack, Dennis wanted a solid base for the manure forks and tractor. This has worked fabulously so far - we let it build up to about 18" over the winter, and it warmed the does from underneath, but we clean it out more frequently in spring, summer and fall.

Our kidding pens are also in the run-in shed - as you know, we dam raise, and lock up babies overnight after they are 2 weeks old. I like my does to remain with the herd during kidding, so the Sydell panels allow for that and for kids to be kept overnight near their moms. A few enterprising kids have escaped and/or convinced mom to come nearby so that they can nurse, but overall, the system has worked well for us so far.

Our parlor is set up so that the does come in one door on an elevated platform, which was custom made by Dennis using Sydell head gates. It is only 16" off the ground, as I prefer to sit behind the does. The parlor is also quite small - only 7x12 feet. I currently milk 4 at a time, but if I purchased more headgates and adjusted the platform, we could squeeze 6 in there if we wanted to in future. If that were to become important, I would also install a pipeline and concrete elevated platform and stand behind them. For now, I'm happy with my setup.

I like the small size because it's just big enough for one person to milk. A second person for milk testing fits just fine, but it's a little tight behind the does. Also, the smaller the space, the less that needs to be cleaned!

I'm milking with a 3 or 5-gallon stainless steel bucket system, depending on how many animals are in milk. Dennis piped in the vacuum line - we put the pump in the vestibule so that the noise wouldn't be a factor in the parlor.

Once the does are milked, they are dipped and exit out the opposite door to a pen where they can munch on hay and wait for milking to be completed. After milking, I let the babies and does all out into the common area, and in spring/summer/fall, we take them out to their daily pasture to forage.

The parlor and milkroom (milkhouse) have common doors into the vestibule, so when milking is completed, I carry the milk bucket from the parlor and into the milkroom. There, since we are manufacturing grade, I do not have to have a bulk tank with chart recorder - instead, I currently have a refrigerator. If it is a herdshare milk day, I pour the milk directly into sanitized half gallon mason jars and place them in the freezer for an hour before transferring to the refrigerator or coolers for transport. If the milk is destined for cheese or caramel, I place the milk into 2.5 gallon milk cans and freeze for an hour before transferring to a cold water bath in the refrigerator to complete the cooling process. 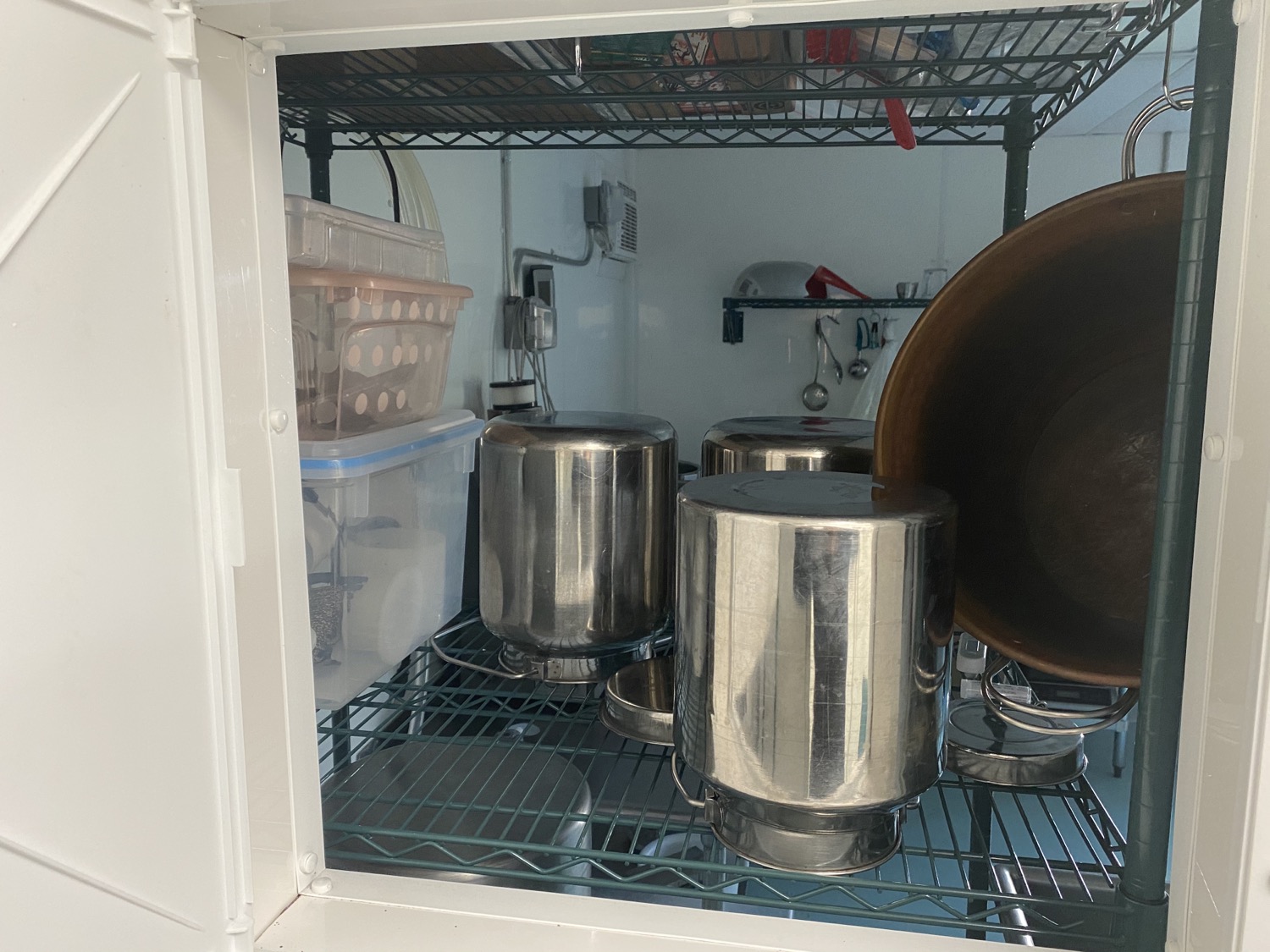 I built the milkroom with the intention of purchasing a small bulk tank - it is on the agenda for 2021. I want to have more control over cooling the milk and would prefer to milk with the 3-gallon bucket and just transfer a few times - it feels like every day is arm day when I'm hauling around a 5-gallon bucket!

The milkroom also has a 2x2 foot window to the cheeseroom, so that I can transfer milk cans through and onto a shelf when it's time to make cheese or caramel. That surely beats lugging it out and around, and helps reinforce that a shower/change of clothes are necessary when going from animal work to cheesemaking.

Inspection of the parlor and milkroom went so smoothly - everything I worried about was a non-issue. The inspector loved the wall coverings, and was happy with everything that we set up.

We intentionally put as much as possible (including the trash cans - sanitary napkin waste holders!) on the walls, so that it would be easy to hose down (parlor) or mop (milkroom).

One issue that came up for us and was a problem was with the drains. When we had our initial several visits with the inspector, he specificed trapped floor drains, but did not specify that the sink drains also needed a trap with an air gap (like in commercial kitchens). This caused a problem for us, as we assumed that a normal sink trap was acceptable. Thus, we had to really wrangle the sink trap so that there would be an air gap (to prevent potential backups from going into food-grade sinks). Fortunately, we did not have to jackhammer the concrete - an above floor trap with air gap was acceptable in our situation.

In terms of hands-on from the dairy inspectors, they inspect the parlor and milkroom every 6 months, and get a monthly sample to test for bacterial counts and SCC. Otherwise, we have a good working relationship without too much interaction.

And that's it for this post! In the next post, I'll talk about the cheeseroom, as it was a completely separate building and inspection process.